The Lansing Area N-Trak Railroad Club was formed in early 1992 by a group of model railroaders interested in N-scale.  Early on, club members decided to build a modular layout to display at area train shows and related events.  We decided to build these modules according to national N-Trak standards to ensure reliability and allow compatibility with other NTrak groups around the world.

LaNtrak went on to build and operate a set of modules that were used at train shows and at the former PM/C&O Howell depot on the Fowlerville Fair Grounds.  As time went on (and age also went on) the members found it harder and harder to transport and set up their ‘Cadillac’ modules.  A new standard was sought out.

Starting in 2014 and over the period of about a year, a new smaller, lighter, easier to set-up module system was 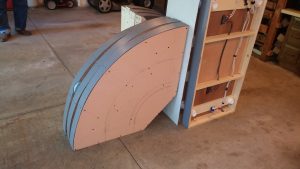 In the summer of 2017 several LaNTrak members visited a national N-Scale meet in Pittsburgh, PA.    There they were bitten by the T-Trak bug, we now have a T-Trak Division.  More on this later.

While our membership resides primarily in Ingham and Livingston Counties, anyone in the central Michigan area is welcome to join.  LaNtrak’s active members are from Alma, St. Johns, Lansing, Holt, Brighton, Howell, Grand Blanc, East Lansing, Napoleon and Vandercook Lake.

After many years of meeting in the former PM/C&O Howell depot near Fowlerville, we no longer have a permanent location.  Because we do not have a ‘home’, meetings are held at various locations around the area, either at members homes for work sessions or at the Capitol Area District Library in downtown Lansing for learning/sharing sessions.

Meetings are generally held every Wednesday with the work sessions frequently starting at 2:30 p.m. and running until about 10 pm with a break for dinner and the learning/sharing sessions at the library beginning at 7:00 pm preceded by dinner at a Lansing restaurant.

It is always best to call ahead to verify if the meeting is going to be held.  Contact Mark Cowles (Howell) at 517-546-5241, e-mail at [email protected]  Guests are always welcome.